Warning: Cannot assign an empty string to a string offset in /homepages/24/d97156732/htdocs/bradandjulie/wp-content/themes/weddings/functions.php on line 520

Warning: Cannot assign an empty string to a string offset in /homepages/24/d97156732/htdocs/bradandjulie/wp-content/themes/weddings/functions.php on line 522

Warning: Cannot assign an empty string to a string offset in /homepages/24/d97156732/htdocs/bradandjulie/wp-content/themes/weddings/functions.php on line 524

Warning: Cannot assign an empty string to a string offset in /homepages/24/d97156732/htdocs/bradandjulie/wp-content/themes/weddings/functions.php on line 526

Engaged to Be Always Together

The Rain Came – Brad’s take on the proposal

A few years ago, in the wake of my wife’s death, I added a second floor to my one-story bungalow. My counselor and I had a conversation about how the project was progressing. I was building my house on a promise that I felt was from God. That promise was that I would be married again someday and get to have more children. (As it was, my two kids and I didn’t need the extra space.) It was a promise I believed, and so I added a second floor.

On Wednesday, January 13, I had my parents and girlfriend over to celebrate my birthday. After dinner came the opening of presents. The last present I opened had some slightly more — shall we say — unique gifts. The first item was an angel with the Noah’s Ark story depicted on the bottom of her dress. I pulled it out, recounting to Julie the conversation I had had with my counselor years prior. She thought it was cool, but still thought it was for me, so I pushed it towards her. “This is actually for you.” 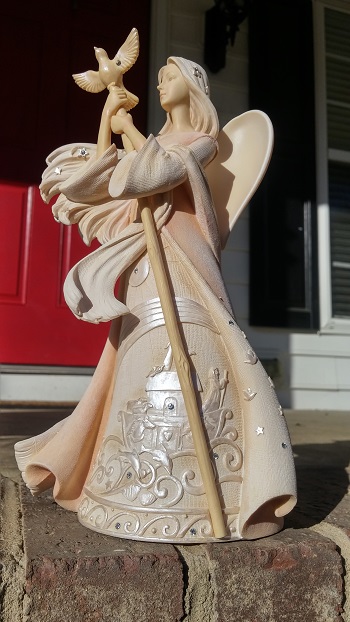 As she surveyed the angel, I returned to my box and took out a dozen roses. I then turned to kneel in front of her. She had posted on her Facebook years ago just before Christmas, “All I really want for Christmas is for a wonderful man to send me beautiful roses, with a note saying how much they love me and don’t want to picture their life without me. Then for that sentiment not to change for next infinity of Christmases!

Now that would be absolutely amazing!”

And so, as I knelt in front of her, I told her, “You’ve wanted a man to give you roses and profess his love for you. Well, I do love you, and I want to spend my life with you. Will you marry me?” After her answer, some tears and smiles, and hugs and kisses, I presented her with the final item from my box: an engagement ring.

After we embraced each other in celebration, I returned to my dwindling stack of presents. I grabbed the last present and gave it to Julie’s 2-1/2-year-old daughter, Hannah. She opened it to find a plush Noah’s Ark with animals stored inside. And I told her that I would love to be her daddy. I asked her if she would like that. She, like her mommy, said “yes.”

As I have read the story of Noah recently, I have taken note especially of how he sent out a dove so that he would know when land could be found. I liken our relationship to that story. It began raining last summer as I met Julie; the flood endured while we got to know each other and dated; and now, the dove has come back to me having found land. She is the land I have been searching for all these years. And now, my house can be fully used as we add two beautiful ladies to our family.

The Plan Changed – Julie’s take on the proposal

On Wednesday, January 13th, I awoke with many thoughts flowing through my mind. “Oh goodness, I pressed snooze too many times again; what a lovely time I had with Brad last night for his birthday; I hope I am not late to work; is Hannah’s cough going to get better soon; did she sleep well…” You know, the usual stream of thoughts a woman and a mother often wakes up to. Little did I know, today wasn’t going to be the same as any other day. Today, my life plans would change.

I headed out the door to work hoping I didn’t forget anything. As I drove, I reviewed my mental checklist feeling a little worn out by life. That evening, I was scheduled to go over to Brad’s house for birthday dinner with his parents and all the kids. As much as I was looking forward to it, a part of me was wondering if I should go. It had been a full week and Hannah wasn’t feeling well. The battle commenced in my mind. What is the right thing to do? I mentioned to Brad that I wasn’t certain about the evening, and if we came we would need to leave early. He kindly offered to keep Hannah overnight and watch her the next day so I wouldn’t feel too overwhelmed with the week’s demands. I had to be at work extra early the next morning. His offer was so sweet and thoughtful; I had no idea it was not only his way of caring for Hannah and I but also ensuring we came to the evening celebrations. He had a plan!

Hannah and I arrived at Brad’s house that evening and enjoyed a delicious birthday dinner. A beautiful cake graced the center of the table waiting for candles and a song. In the living room, four gifts sat all wrapped in “Happy Birthday” paper. It all seemed just as it should. After dinner, Brad gathered us in the living room for present time. Somehow, he managed to arrange for me to sit alone in the recliner chair. I simply thought he was giving me the comfy chair. He had a plan!

The birthday guy arrived at the third gift and opened up a lovely box. I immediately noticed how pretty is was. Still, I was clueless. He pulled out a gorgeous angel with a scene from the story of Noah’s Ark engraved on her flowing skirt. He began to share the story of how he built the second story on his home after his wife died. The large addition to his home was done in faith that God was sending him a wife and the kids a mother. He recounted how he and his counselor likened it to Noah building the ark in faith that the rain was coming. Even then it didn’t hit me. He turned toward me and said, “So, this is for you.” I was surprised, and yet, it still had not dawned on me. I sat back down on the recliner and looked over this thoughtful gift. He returned to the box and retrieved a dozen red roses. I looked up to find him on his knees with the roses. Yes! Then I got it! He was asking me to be his wife. Honestly, after that it was a blur. My heart was bursting with joy! I heard him say “Will you marry me?” and I heard myself say “Yes, of course I will.” I couldn’t stop smiling. He had a plan!

There was one more gift remaining. Brad took it over to Hannah and had her open it with him. It was an adorable plush toy of Noah’s Ark, complete with stuffed animals inside. As she opened the gift, Brad asked her, “I would love to be your Daddy. Can I be your Daddy, Hannah?” Hannah looked up at him sweetly and nodded her head yes, and then went back to happily playing with her new toy. My mother’s heart was overflowing. God had sent us a double portion of love. It was worth the wait. God had a plan! 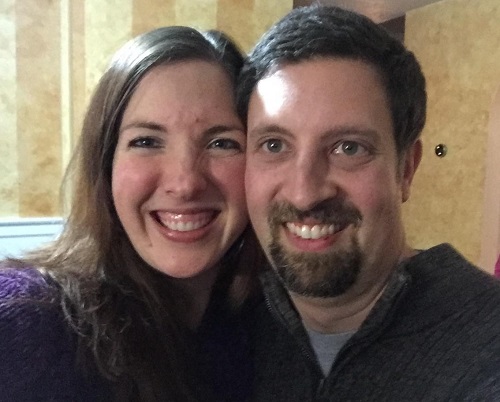